Highway 417 from Ottawa to Montreal is about as boring as they come. Long straights flanked by fallow farm fields and few trees, this long arc of concrete and asphalt suffers equally from frost heaves and winds that beat on whatever happens to be driving upon it. Spanning this link between cities is a bit of workout. Only speed cures the boredom. Luckily, our 2018 BMW M550i XDrive is a very fast car.

Suddenly an alarm chimes, like a futuristic spacecraft warning its pilot that warp speed in this part of the 417 cosmos comes with inherent dangers. In our case, the risk is not meteors, but OPP and a costly fine as the big sedan eclipses 125 km/h, the point at which I have set the onboard alarm to go off as a reminder to slow down. “Bling” goes the alarm again. And again, with a visual clue on the heads-up display. Capable of reaching 250 km/h — the first 100 km/h eliminated in a mere four seconds — this is a BMW simply not willing to adhere to such a modest limit. Indeed, so easily does this 5-Series manage great speed, keeping to the limit is an exercise in frustration: clearly this is a car more competent than anything this country legally allows on its roads. Perhaps it should be called the Lawless Edition.

To be sure, the M550i is not an M5. That car, long held as the epitome of how a high performance sedan should behave, not only costs more at $113,000, the M5 is substantially more raw, its 600 horsepower focused on serving a track experience better than anything with four doors has any right to deliver. The M550i on the other hand, at $83,000 to start, might sit one notch below the almighty M5, but it is far from second fiddle. A 455 horsepower, 4.4-litre V8 boosted by twin turbos makes this machine the most powerful in the regular 5-Series stable outside of the M. And the pleasure that comes from driving the M550i is entirely first rate.

Yes, the big Bavarian is heavy at slightly more than 2,000 kilograms, a heft that can be felt at the point where the tires are about to lose traction in a big sweeper. But its acceleration — and the roar that pours from its rectangular quad pipes when all 480 lb.ft. of torque are unleashed — enriches the soul with an immediate burst of endorphins, providing such an addictive rush that this car ought to come with some kind of warning from Health Minister Ginette Petitpas Taylor.
Even under hard throttle, when a car’s shortcomings tend to emerge in the form of coarseness or loss of composure, the M550i retains a high degree of elegance, each shift of the eight-speed transmission tailored for immediate engagement across the rev range like the stitching of a bespoke suit. When the scenery starts to blur, the M550i feels as sure and smooth as something costing this much money should. Cornering is something to behold, to embrace, to pursue. An Adaptive M Sport suspension lowers ride height by 10 millimetres, thus lowering the centre of gravity. A heated M sport steering wheel feels perfect in the hands (even if it didn’t tilt low enough for me.) Braking is peerless, the M sport brakes able to reign speed so quickly under a hard stop the seatbelts will automatically tighten around your chest. And if driving fast in Sport + mode is not your forté, a comfort, individual or eco mode alter the car’s dynamics dramatically — a personality change that almost makes for three cars in one, all with a big trunk.

Actually, maybe even four cars, because BMW’s xDrive turns the normally rear-wheel drive sedan into a confident 4×4, sending power to the front or rear wheels as required. Equipped with Scorpion winter tires over 19-inch wheels, our XDrive M550i made a mockery of snowy Ottawa roads, clawing its way forward and resisting spin better than many trucks. And when the roads finally dried out, the AWD system increased handling agility, the best for both seasons.

The M550i might also reign supreme inside too, the interior not as Kardashian as a Mercedes, or as austere as an Audi, but technologically rich nevertheless, replete with WiFi that can play your Spotify playlists, as well as an around-view monitor that three-dimensionally pans around the car for obstacles. Several driving aids, from pedestrian detection to steering assist, take the tax out of driving. Sharp and clear digital instrumentation, understated ambient lighting, good sport seats and an excellent center screen controlled by BMW’s iDrive, illustrate an interior that is as functional as it is orderly. The outside, too, with big air intakes and side vents and a petite spoiler out back, is a pleasing blend of haughty and haute couture — a car as comfortable dropping guests in front of the NAC as it is tearing up the 417 to Montreal. 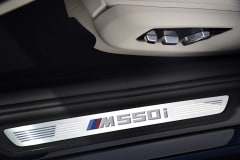 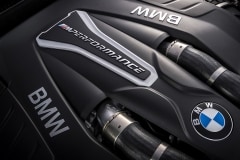 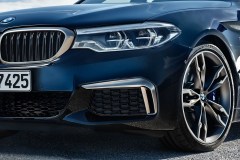 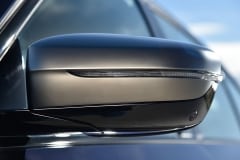 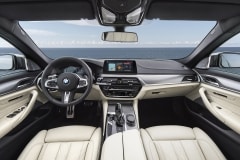 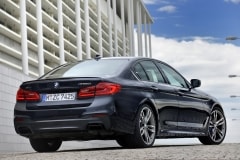 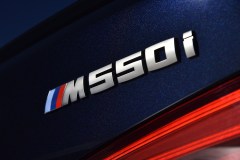