Once the epitome of sumptuous design, Jaguar’s cars have not always enjoyed the magic of the marque. Icons like the D-Type of the 1950s or E-Type of the 1960s, or even the XJ6, revealed a penmanship like few others—one that has proven elusive to replicate. Affection for the brand yawned under independent ownership; even after Ford took over through the 1990s and early 2000s, Jaguar models were seldom synonymous with gorgeous.

In March 2008, however, Ford sold Jaguar and Land Rover to Tata Motors for US $2.3 billion. Under Tata, Jaguar Land Rover has become an entity with a sharper focus on elegance, quality and performance. More importantly, Jaguar Land Rover launched in 2014 its Special Vehicle Operations unit—a little like BMW’s M division or Mercedes’ AMG arm—in Warwickshire, England, with a team of 200 specialized engineers, intent on turning regular Jags and Rovers into vehicles that would earn everyone’s respect.

And, wow, has it worked. The arrival of the 2020 Jaguar F-Pace SVR, only the second production vehicle to come from the facility after the Jaguar F-Type Coupe, is not just a seductive-looking SUV, it is a compelling and utterly fascinating vehicle to drive, marking new territory for a brand that began building cars almost 90 years ago. 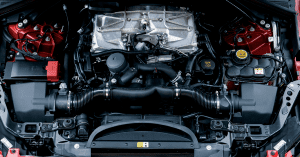 Looking downright villainous, the new F-Pace SVR is what a proper Jag ought to be—equal parts fast, furious and luxurious. Lighter 21-inch or optional 22-inch wheels, hood vents for the intercooler, side vents for the brakes, big air intakes up front and rear diffusers work to slice the air. Four, 95-mm exhaust ports are not only lighter, they sound properly feral (though they can be quieted too). It’s a buffet for the senses.

And that’s just the exterior. Stand on the gas pedal of this $92,000 SUV, however, and the true reward of a vehicle that has undergone the SVO scalpel, rises to the surface. In an instant, the 5.0-litre V8 beneath the creased hood releases 542 horsepower to all four wheels in the form of 502 lb.-ft. of torque, accompanied by some sinuous supercharger whine up front and those four chrome pipes out back, each oval barking like a rabid dog. In 4.3 seconds, the speedometer needles past 100 km/h; 200 km/h arrives in only a few seconds more on its way to a top speed of 283 km/h, which seems bonkers for a mid-size SUV that will primarily see more days at the local hockey rink than anything resembling Calabogie Motorsports Park. 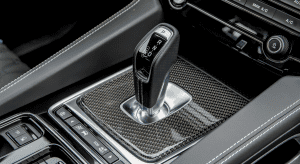 Yet driving the F-Pace SVR obscenely fast is highly enjoyable and a totally engaging endeavour because the SUV remains so smooth and so well composed at crazy speeds. NVH is all but eliminated. There is almost no wind noise. Sprinting off the line and hitting 150 km/h feels serenely effortless. Suspension tuning is so well executed it makes long drives—especially in these highly comfortable, Lozenge quilted leather sport seats—an event to anticipate. As Ross Restell, the lead engineer of SVO vehicle dynamics puts it: “What’s the point of having an SUV like this if it beats you up all the time?”

Indeed, Restell and his team have hit the sweet spot of comfort and performance. Torque vectoring of the rear wheels, coupled with a standard electronic active rear differential and a constantly variable AWD system that usually powers the rear wheels (but can send up to 50 per cent of torque to the front wheels), keep the F-Pace SVR surprisingly well planted.

New dampers and stiffer spring rates keep bounce and lean to a minimum, the overall ride impressively delivering equal parts smoothness and control even in “Dynamic mode,” the sportiest of settings. It’s neither hard nor too soft. A massive recalibrating of F-Pace software also helped each system perform to its maximum ability.

Electric steering has excellent feedback and weight, sorting itself out as the speed gets quicker. Braking power is good but not outstanding, and the pedal didn’t remain as firm as I would have liked after repeated rounds of reddening the rotors. That’s partly because the 1,995-kilogram SVR does forward momentum so well, that we come to expect the same in reversing that momentum, especially since the SVR wears larger and lighter 395 mm brakes over a regular F-Pace. 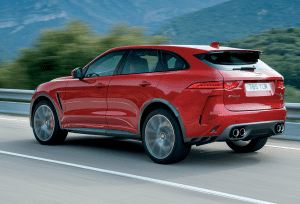 The cabin, of course, has been handsomely tailored in fine materials and brought up-to-date with standard Apple CarPlay and Android Auto as well as 4G Wi-Fi for up to eight devices, although it’s too bad it doesn’t get the new steering wheel that debuted on the I-Pace, or some of the switchgear and climate controls in the updated Jaguar XE. But the fit and finish is very good. A new pistol-type electronic shifter for the eight-speed automatic, complements aluminum paddle shifters behind the wheel. Shifts are quick and precise. A 10-inch touchscreen infotainment system crowns the centre stack, with touch controls that work well. A standard 12.3-inch interactive TFT instrument cluster is graphically sharp and clear. Interior and exterior options are many. The only area where the interior falls short is useable cargo space, the 33.5 cu. ft. behind the rear seats is barely big enough to accommodate grandma and grandpa’s airport luggage, when they come for a family visit. A deeper and wider armrest cubby up front wouldn’t hurt either.

But, so what? While utility may not be the F-Pace SVR’s strongest suit, the SUV brings a new and refreshing thrill to motoring, especially at high speed. The SVO engineers who built this Jag say they are extremely proud of what they accomplished. As they should be—it’s a Jaguar that truly befits the brand.