The Key to Making Every Day Sparkle

Champagne. It’s a mythical wine associated with luxury, romance and the celebration of life’s milestones. It is also a wine so versatile that it’s a shame we don’t drink more of it with meals and not just at special occasions. In the region of Champagne earlier this year, I visited a dozen or so Champagne houses, from larger, well known houses like Charles Heidsieck, Krug and Taittinger to smaller, family-owned grower-producers like Fresne-Ducret, Pierre Gimonnet et Fils and Henriet-Bazin. There was also Champagne at every meal, except breakfast, and it’s clear that beyond the tried-and-true pairings of Champagne with oysters or lobster, there’s a style of Champagne for pretty much everyone and every meal.

CHAMPAGNE OVER THE YEARS
The history of winemaking in Champagne dates back to the fifth century, though most of its wines were not sparkling until two centuries later. While the Benedictine monk Dom Pérignon is often credited as the inventor of Champagne, the region’s development from producer of still to sparkling wines evolved over time. Pérignon was one of the first to blend wines from different vineyards, but his early attempts at refermentation were foiled since the pressure of the released carbon dioxide was too strong for the glass bottles of the era.

Prevalence of sparkling wine grew with the introduction of stronger bottles by British glassmakers, and production increased after sparkling Champagne was introduced to the Court of Versailles and to London society. It was not until the 19th century, though, that the traditional method sparkling wines of Champagne came to dominate production. This was due in part to new production techniques invented by Madame (Veuve) Clicquot, along with an influx of savvy German entrepreneurs like Bollinger, Krug and Mumm, who shaped the foundation of the modern-day wine industry in Champagne.

In 2015, the vineyards, houses and cellars of Champagne were declared a UNESCO World Heritage Site and today the two main towns of Reims and Epernay are known for their labyrinthine cellars carved deep into the region’s chalky sub soils. They hold millions of bottles of wine undergoing secondary fermentation. To experience the celebrated Champagne region in person, start with the Champagne Bureau’s website, www.visitlachampagne.travel. 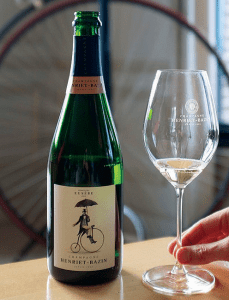 The region of Champagne has been a defined geographical area since 1927 and it encompasses a complex network of 340 Champagne houses, 140 cooperatives and 16,000 growers, the latter of which increasingly make their own Champagne instead of selling grapes.

Champagne’s 34,000-plus hectares of vines are planted largely with Pinot Noir (38 per cent), Pinot Meunier (32 per cent) and Chardonnay (30 per cent), though four other white grape varieties are permitted: Arbane, Petit Meslier, Pinot Blanc and Pinot Gris. Some producers celebrate the lesser-known varieties: Tarlant’s BAM! is made entirely from Pinot Blanc, Arbane and Petit Meslier.

Although some Champagne is made from a single vintage and/or single variety, Blanc de Noirs for red varieties and Blanc de Blancs for Chardonnay, most Champagne is a cuvée or blend that can come from different crus (villages) and vintage years, with the vin de réserve (reserve wines from different vintages) comprising more than 50 per cent of the final blend. Some producers ferment Champagne in oak, while others choose stainless steel for aging and are experimenting with clay amphora. There is also the increasingly popular rosé Champagne, which can be made either by blending red and white wines or by the maceration of red grapes on their skins.

CHANGING TIMES
Though the Champagne region lies at what is considered the northernmost limit for wine growing in the northern hemisphere, it has undergone numerous changes over the past decade. The vineyard area has expanded, more growers are producing their own Champagne instead of selling grapes to large houses, and climate change is profoundly altering growing conditions.

Champagne has also been transitioning to more sustainable growing over the past decade. The region is committed to the elimination of herbicides by 2025 and to environmentally certified production by 2030. The Champagne Bureau has also been exploring the development of more resistant grape varieties to mitigate the effects of climate change. An upside of hotter weather is that growers can use fewer herbicides and chemicals when tending their vines, making organic and biodynamic viticulture more widespread, with better wines as a result.

Despite the challenges, Champagne continues to produce some of the top quality and best value premium sparkling wines. The best highlight winemaking expertise that illustrates the diversity of soil types and vineyards, along with the personalities of those who make them. This is a shift from the consistency of house blends sought in previous years. Vintage variation continues to have a visible impact on quality and the final product, and in the case of warmer vintages, this results in fuller bodied, more flavourful and richer Champagne than in the past.

You’ll want to discover that for yourself. Rather than wait for a special occasion, reach for the super powers of Champagne. Its sparkle adds depth and focus to savoury, fruity and meaty flavours, while its seam of acidity cuts through fatty, rich dishes and sauces. Champagne can even transcend vinegar, citrus and tomatoes like no other wine can. And who wouldn’t want to drink to that?