Ingrained in his soul

For Thom Lockwood, working with wood is more than a passion. It’s in his blood.

For bespoke furniture-maker Thom Lockwood, it’s all about the grain. It’s that satisfying moment — the eureka moment — when a tabletop has been sanded to a satiny smooth finish and then oil is applied.

“It’s not until you put the oil on that the grain shows up,” says Lockwood, who firmly believes the grain should be as nature intended.

There are no colour-changing stains in his Ottawa workshop. “If you want a dark wood, use walnut and if you want a light wood, use ash or maple.”

Lockwood is originally from Renfrew, a community an hour’s drive west of Ottawa, which grew out of the bustling 19th-century forestry trade. That’s what attracted Lockwood’s paternal grandfather, Fred, an English immigrant, to settle there in the early 1900s to work in a sash and door factory. Later, Fred ran his own company, Wood Works of Renfrew. It’s where Lockwood began his own career.

On the side, Lockwood started making furniture. Commissions came from various nearby cottage owners, including the extended Milliken family, whose most famous son, Peter Milliken, later served as Speaker for the House of Commons and took one of Lockwood’s coffee tables to his Parliament Hill offices.

By the early 1980s, Lockwood all but stopped making furniture, the family lumber business taking up too much of his time. Then at age 40 in 1991, he left the business and went to Algonquin College to study interior design. After graduation, he established his own design business in Ottawa and taught various aspects of design part time for 10 years at Algonquin.
This past January, Lockwood, now in his 60s, came across an old teak stereo cabinet at an Ottawa auction house for $50. He decided to repurpose the wood. The result: Two triangular cocktail tables and his triumphant return to furniture-making.

Two of his recent examples include a pair of cocktail tables with dark walnut tops and light maple legs. The walnut tops are vertical slices of wood from the crotch of a tree. These exotic wood slabs are purchased at KJP Select Hardwoods off Merivale Road.

So, why did Lockwood return to furniture-making?

“Artists have a need to create things,” he explains over coffee. “It is a strong force. For me, it’s the sense of satisfaction that I’ve actually created something.

“I’ve worked it out in my mind. I’ve done sketches. I’ve done plans. Then it’s put together and finished and you have this incredible satisfaction when it’s done.”

Lockwood’s custom tables start at $500 and are currently available at the Bittersweet Gallery in Burnstown and at his home studio.

He can be contacted at forest.lockwood@gmail.com 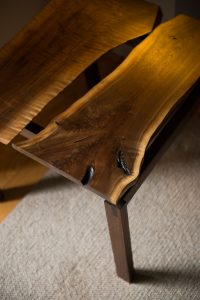 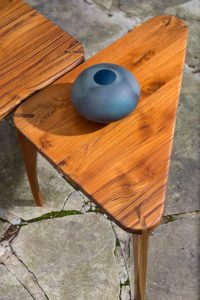