Operating ski resorts isn’t glamorous work, but for brothers Bob and Peter Sudermann, who are reshaping local hills around Ottawa, it’s a labour of love

Sounds like the dream job, doesn’t it? Ski resort owner. Out on the slopes all day; lounging by the lodge’s crackling fireplace in the evening, your favourite beverage at hand.

Brothers Robert (“Bob”) and Peter Sudermann are in the ski-resort business. Together they own Camp Fortune in the Gatineau Hills and, with other partners, Mount Norquay in Banff.

Bob also owns Mont Ste-Marie in Lac-Sainte-Marie, an hour’s drive from Ottawa, while his brother is a partner in the Great Northern Snowcat Skiing resort south of Revelstoke, B.C. and Daya Spa in Ottawa.

And while the two do ski most days in the winter —  in part to keep direct tabs on conditions — their lives, like ours, aren’t idyllic.

“When the weather is great and the planets have aligned, it’s an amazing business to be in,” says Bob. “When you get those bad winters, green Christmases, it’s not so great after all.”

Apparently born with the optimistic streak essential in a business tied to the whims of Mother Nature, he quickly adds, “What is it they say? ‘Skiing is like sex: when it’s good, it’s great, and when it’s bad, it’s still good.’ ”

Natives of Winnipeg who now live in Chelsea, Que., the brothers “always had a connection with skiing — we grew up skiing as a family,” says Peter, 58, a father of two, who also competed in cycling at a national level.

Accomplished skiers, the brothers return each summer to their cottages on the shores of Lake Winnipeg along with their siblings and mother, whose family has been there for three generations.

Peter and Bob, 54, made their first foray into the business in 1989 as operators of a man-made hill in Winnipeg. Five years later, they’d taken over Camp Fortune, which had been a skiing destination since 1920, but by the time the brothers appeared on the scene had deteriorated into a “burned-out old ski area,” according to Bob.

The Sudermanns quickly began upgrading the site and have since added a new lodge, opened enhanced snowmaking operations and made other improvements.

In 2002, Bob bought Mont Ste-Marie from Vancouver-based Intrawest Corp., and he and his brother joined forces with other investors four years later to buy struggling Mount Norquay.

While Bob owns the land at Mont Ste-Marie, the property at Camp Fortune is leased from the National Capital Commission and that in Banff from Parks Canada.

Of the two Ottawa-area sites, Mont Ste-Marie is the bigger hill, but Fortune attracts more visitors because it’s only a 20-minute drive from downtown Ottawa. Between them, the two hills bring in more than 300,000 visitors a year and employ more than 500 staff, including ski instructors.

The brothers seem to take in stride the operation of three substantial businesses, including one that’s thousands of kilometres away. “We have a good manager out West,” says Peter. “I’ve been self-employed since the age of 14,” says his brother; “I’m used to stress — it’s just the way life is.”

The two agree that skiing has changed over the years, and resorts along it. Some of those changes reflect broader shifts in Canadian society.

For example, Camp Fortune’s 1990s, mid-week program for at-home mothers eventually went the way of the dodo as more and more women returned to the workforce rather than staying home with their kids. At the same, the hills became increasingly populated during the week by older, retired skiers who had returned to the sport with the advent of shorter, easier-to-control skis and other equipment changes. 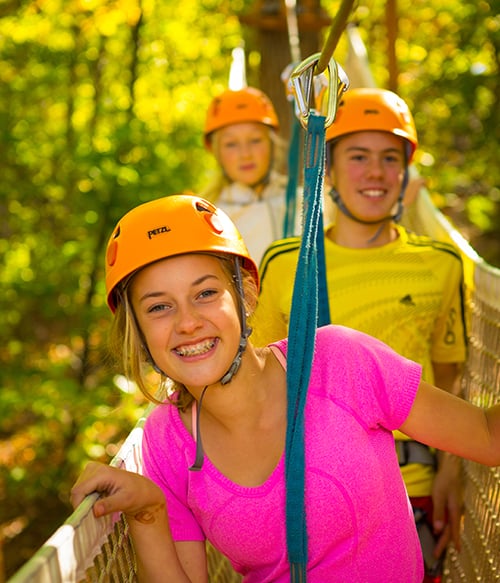 There’s also been a surge in enthusiasm for skiing among new immigrants, says Bob. “They are embracing our culture, and that includes skiing. They’ve never skied before, and they need rentals, lessons — they hit every profit centre that a ski resort has. So, bring it on — more immigration!”

There have been other changes at their resorts. Rather than sitting idle in the summer, for instance, there are activities like an aerial adventure park including ziplines at Camp Fortune, a mountain biking festival at Mont Ste-Marie, and climbing at Mount Norquay.

What hasn’t changed is après-ski life. The sport, says Peter, is still “very social,” and that means lots of friendly chatter as skiers gather in cosy lodges to swap tales of adventures on the slopes and, just possibly, flirt a little.

Bob, a father of four, says his children have worked at Camp Fortune in customer relations, maintenance and food and beverage. His daughter Taylor, a university student and social media adventure sensation, is behind a “rail-jam” event in December called Avant-Ski in collaboration with Red Bull. Fortune’s annual open house, a mini ski show, will be held Nov. 5.

“All of my children ski-raced or snowboard — same with Peter’s two children. It’s a family affair,” says Bob, who is an avid kite-surfer.

This winter should be a good one for Ottawa-area skiers, according to the Sudermanns. Ongoing improvements to grooming and snowmaking equipment at their hills mean better skiing. “There are things people won’t physically see, but will feel,” says Bob.

Grooming and snowmaking also help ski-resort operators battle the effects of climate change, which brings milder temperatures and makes it difficult to open the season on time. Peter figures changes in weather have lopped about five days off their skiing season over the past decade.

If you’ve ever aspired to own a ski resort, Bob says to learn about the business from the ground up. Starting with a smaller facility, as he and his brother did in Winnipeg all those years ago, is a good first step because it means you learn to do everything.

And when it’s time to buy, “Keep your ear to the ground. They’re not making mountains anymore, but opportunities do come up.”