Barbados offers old-world distinction and all the amenities imaginable.

I stop, astonished at the sight of St. Nicholas Abbey: a Jacobean- style mansion. With its Tudor arches, ornate multi-curved gables and decorative casement windows, the sugar plantation’s great house is an incongruous sight in the secluded hills of Barbados. A British aristocrat built the home shortly after England colonized the island. Portraits of other owners reveal one resembling British actor Benedict Cumberbatch: it is his great, great, great grandfather. Some 350 years later, descendants of early British settlers still produce St. Nicholas Abbey Rum. The island retains much of its British heritage. Indeed, more Brits visit Barbados than any other West Indian island. This “Little England” comes complete with cricket games, polo matches and afternoon tea. Add in a UNESCO World Heritage-listed capital, beautiful sandy beaches, an interior sprinkled with gardens, wild surf on the less-populated east coast, a laid-back civility and elegant resorts and you have an island ranked among the Caribbean’s top luxury destinations.

Sumptuous villas and resorts line the fine white-sand beaches on the island’s tranquil west side “Platinum Coast.” The crème de la crème, with prices to match, is Sandy Lane. Classical Palladium-style buildings with 112 tastefully decorated rooms and a five-bedroom villa face the sweeping expanse of beach. Servers pamper guests, offering Evian water misting or cleaning the sunglasses of those sitting by the beach or pool. Extensive sports facilities mean you need to leave the grounds only for golf. Besides a nine-hole course, there’s a 3,060-metre (3,345-yard) par-36 course and the ultra-exclusive Tom Fazio-designed 6,714-metre (7,343-yard) par-72 course created within an old limestone quarry. Edging the island’s second-largest city, Speightstown, is the country’s only Relais & Châteaux property, the recently $15-million-renovated Cobbler’s Cove, the World Travel Awards winner of Barbados’ Leading Hotel in 2018. Entering the property, past the small reception area, is akin to walking into a garden. Palms swish in the gentle sea breezes, orchids trail from trees, and red hibiscus flowers frame pale pink stone buildings.

Built for a plantation owner in 1944, the main house exudes English country-house charm. On the terrace, you’ll find a Relais & Châteaux five-star restaurant. Upstairs there are two deluxe suites, each with a rooftop terrace and plunge pool. On the grounds, two-storey cottages with one-floor suites overlook either the gardens or the ocean. White wicker furnishings contribute to the low-key Caribbean mood of this small exclusive resort, which hosted Ronald Reagan during his presidency. Snorkel with turtles or join the resort’s fishermen in pursuit of the restaurant’s “Catch of the Day.” Boats are also available to sail somewhere for a private picnic lunch. In a corner of the more commercial southeast coast, a long driveway winds through lush grounds of mahogany trees, palms and flowers to the Caribbean’s oldest still-operating hotel, The Crane. Built in 1887, the once 18-room hotel has evolved into a huge complex since its purchase in 1988 by Paul Doyle of Toronto. He continues to expand with residential fractional ownership units. Turretted, mostly beige-coloured hotel buildings sit on a cliff. Spacious rooms recreate a plantation’s great house through décor and furniture, such as the handcrafted mahogany four-poster beds. Suites vary in size, all with either a kitchenette or full kitchen. Some have a private pool. White Doric Greek columns edge the adults-only pool, one of four pools. A glass-front elevator whisks you to the pink-tinged sandy beach below. The village square bursts with activity at night. Patterned after downtown Speightstown, it’s encircled by a city hall, shops, an art gallery, huge spa, a complementary children’s clubhouse and some of the resort’s five restaurants. The Japanese-Thai restaurant, Zen, rates among the island’s top dining spots.

Sugarcane and slavery made Bridgetown Britain’s most lucrative port for three centuries. Twisting narrow streets, laid out English Medieval style, and the British Colonial architecture earned the capital and its military Garrison the UNESCO World Heritage designation. Historic sites within the compact downtown include the neo-Gothic parliament buildings, third oldest in the Commonwealth. I had to tightly clutch the banister to go up the very steep stairs to see the House of Assembly and Senate. In the West Wing, photos and videos honour the nation’s 10 heroes. At the Nidhe Israel Synagogue, peer into a 17th-century bathhouse and wander through the museum, restored synagogue and graveyard. One tombstone dates back to 1658. George Washington accompanied his brother to the island in the hope of curing his tuberculosis. Visitors can tour George Washington House, the 18th-century plantation house where they stayed. Spiked manacles and other restraints upstairs reveal the horrors of slavery. Soldiers still occupy the red, brick Garrison, built in 1780. The prison, now the Barbados Museum, covers the island’s history through photos and furnishings. On the Savannah, British officers raced horses. Today, the Barbados Turf Club sponsors year-round races.

Friday nights, locals and visitors jam the roads to get to the decidedly informal Oistins Fish Fry. Everyone squishes together on picnic benches. Stalls sell everything from fried tuna to spiny lobster, along with beer and rum. Canned and sometimes live music adds to the carnival atmosphere. Walking up to the more-refined south-coast restaurant, Champers, we’re engulfed by a loud whistling noise—the chorus of tree frogs, each about the size of a thumbnail. The sound of waves smashing against the building accompanies our meal, a choice of international dishes complemented with bold Caribbean flavours.

The east coast’s dramatically rough waters and enormous boulders draw both photographers and surfers. At Bathsheba Beach, waves reaching up to two metres high crash onto the shore. International surfing competitions take place by the Soup Bowl (named after the foaming water). The less-populated central uplands and rugged Scotland District (named for mountains similar to those in Scotland) shelter many of the island’s natural treasures. At Harrison’s Cave, I took the easiest cave tour I’d ever had. Aboard an electric tram, we passed mini waterfalls, streams and unusual stalactite and stalagmite formations. We stopped at an underground lake to walk around a huge cavern. Classical music and hummingbirds were floating above the enchanting Hunte’s Gardens. Exotic tropical flowers, robust vines and majestic 100-year-old cabbage palms thrive in what was an overgrown sinkhole. The oasis was created by horticulturalist Anthony Hunte, who often greets visitors with a rum punch. Barbados green monkeys roam the island. Brought over on slave ships, in the 17th century, they congregate at the Barbados Wildlife Reserve established by a Canadian primatologist in 1982. A CIDA-funded Primate Research Centre is attached. Swivelling my head, while trying to avoid stepping on the tortoises crowding the uneven brick path, I looked in vain for the monkeys. Turns out, you have to come at their 2 p.m. feeding time, when the wanderers return to the four-acre mahogany forest. For expansive views of the east coast, ride the just-launched steam train from St. Nicholas Abbey to Cherry Tree Hill. 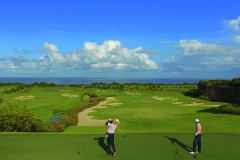 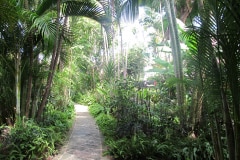 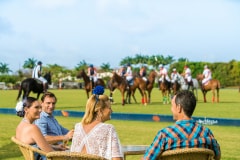 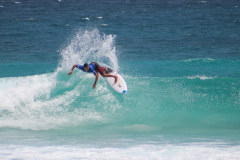