It’s hard to know how to address King Hector Jr. “Your Majesty” seems overly formal. “Your Royal Highness” even more so. But somehow, calling him by his given name — literally King Jr., his father being King Sr. — seems somehow too familiar.
For one thing, there’s the man himself. Regally tall, handsome and most often sporting a beguiling shy smile at fashion events around town, the 25-year-old designer behind the three-year-old We Are Kings label (wearekings.ca) looks and carries himself much older than his years.

Then there is his line of men’s suits, which he adopted wearing as a teen to capitalize on his older appearance. Designed in Canada, made in Nigeria and created from wildly patterned and flamboyantly coloured Ankara cotton, his We Are Kings brand leaves no doubt about the mind frame of potential wearers.

“Fashion has always been a part of me. Nigeria is a very fashionable country, but when I came to Canada there were more options and access to get what I wanted,” says King Jr., who moved to Canada, along with his siblings when he was 18.

His two current collections of suits and blazers, available online and custom-fitted, are “really about empowering men and giving them the confidence to pursue whatever they want. That’s how I got into suits, because you dress as you want to be addressed. I’m shy, but I discovered standing out and being different became my brand.”

Priced according to the fabric, with the most expensive items tagged at $800, he disagrees that the lightweight suits that take three to four weeks to produce and ship are not for everyone.

“A lot of people feel I’m a niche market, but anyone can wear my brand. The professional industry is a huge market — their escape is through colourful socks. Celebrities are a huge market. I’d love to see Kanye wearing one of my suits — if he endorsed me.”

If reaching for the stars, and Kanye seems impossible, that’s not what the University of Ottawa social sciences student, who recently won Menswear Designer of the Year during 2017 African Fashion Week in Toronto, was raised to believe.

Born in Port Harcourt to Miriam, a nurse, and King Sr., an engineer, King Jr. (who often visit their children in Canada), is the second oldest of five children, each colourfully named by their father to teach them that wherever they are, they are royalty. An older brother is Prince, a sister is Princess and the youngest siblings are Victory and Emmanuel.

“My dad taught us we are kings and queens in our own right. You don’t need a title to know who you are. That gave me my value system and driving force,” says King Jr., adding that his mother is his production manager back in Nigeria.

“I walk into a room knowing anything is possible. You can do anything. Think like a king.” 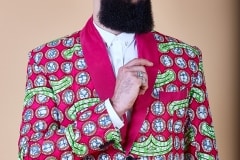 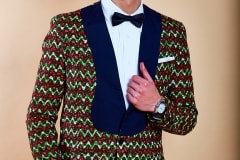 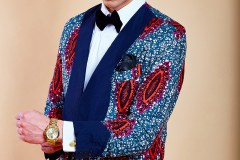 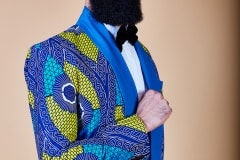