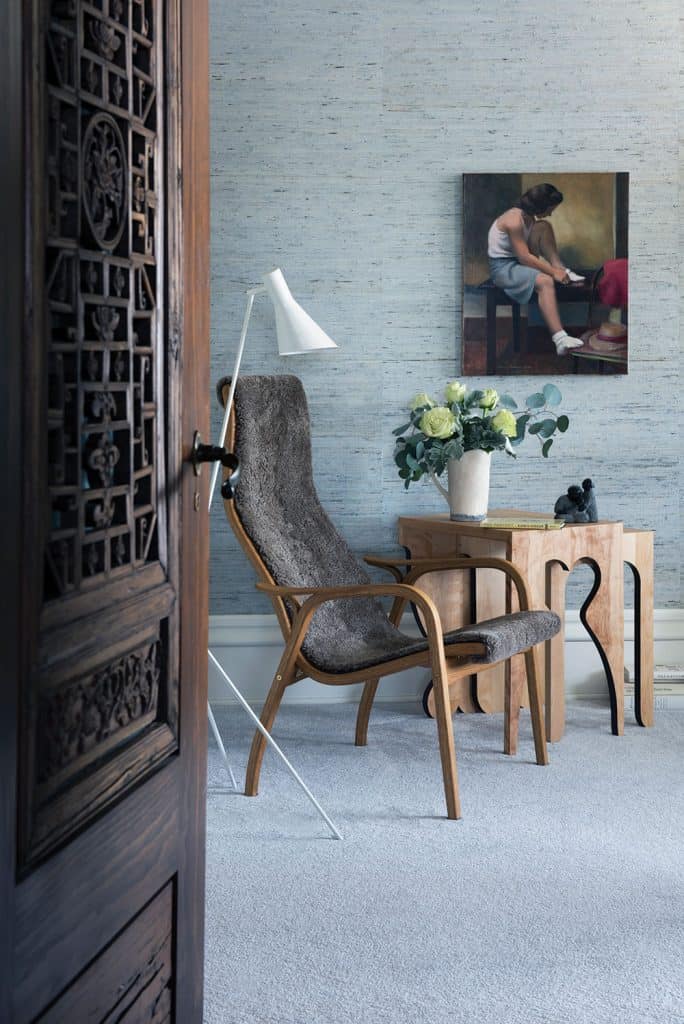 This light-filled slice of heaven is a testament to the fruit that lies in wait for those who bravely walk through their darkest days with the faith that their silver lining is somewhere on the near horizon. How the design of this home came to soar cannot be counted in knowledge of sources, management of trades or an eye for beauty. Instead, it simply came about as a direct result of a true and lasting friendship that begs to be told, in part, here.

I came to Ottawa from Miami just slightly more than 12 years ago to help my ailing father as he grappled with the passing of his wife and his failing health. Unbeknownst to many, it was also an opportunity for me to slowly start afresh: I was leaving my husband and had no other home to go to. I soon discovered that being a young divorcée was quite isolating, but my sons made some good friends, and, in turn, their parents became my friends. One person, in particular, became one of my best friends—and while I didn’t know it at the time, would soon be someone I would desperately need.

Divorce has a way of derailing a person. Your best-laid forever plan lies in tatters at your feet, and you are floating untethered in a parallel world you never thought you would be a part of, an unrecognizable player in an out-of-body experience you fervently hope you will wake from at any given moment. This loss of Self, coupled with the loss of Home, compounded by the death of my father two years later, led me to make bad decisions with life-altering consequences. It was in the darkest hour of these years that my doorbell rang and the best friend I never knew I had was standing at my doorstep. In her hands were two pages, neatly typed. “You’re going to need these. Let me in and read them to you.”

In chronological detail and Hemingwayesque simplicity, her words described why she had the authority and knowledge to unequivocally say I was a good mother. That was all, and that was everything. Two years later, the beacon of light she handed me that day became a judgment that upheld her belief and faith in me.

Those pages turned my life around. I stayed in Ottawa and started working in design once more from the ground up. One last thing about finding yourself prostrate on the ground in a puddle of hurt: Kiss it. It will be the very foundation to lift you up when you find your feet once more.

A couple of years ago, this beautiful above-mentioned friend of mine called to ask if I would come and see an apartment with her. As it turns out, the sale of this apartment was a news item that had caught my eye, as it was right underneath one featuring my own home in the National Post. A Canadian icon had put her storied home up for sale.

It was as a friend—not as a designer—that I first stepped into the lair of a legend. And, as a friend, I failed: Instead of being a proper wingman and finding fault vocally and loudly in front of the real estate agent for future bargaining ammunition, I stood rooted to the spot, awed by the view and silenced by the palpable serenity of the open space in front of me. To seal my fate as the worst house-hunting sidekick ever, when eventually I did find my voice, words poured out in a torrent of ebullient praise in mounting effervescent pitch and volume.

Mercifully, my feverish love-at-first-sight was shared. My friend who had guided me through loss of Home and Self was about to acquire her own home and hand me the reigns of actualizing the Self she had never fully been able to express before.

I was raring at the opportunity to give back the love, care and compassion so freely handed to me many years ago and, armed now with a deeper knowledge of local trades and sources, as well as a sharpened focus, I was ready.

My friend’s only wish was to “de-wood” the place. The former owner had relinquished the apartment with all its contents and one caveat: Nothing was to be sold. Together, we chose the pieces that would stay and the many that would be gifted away. It was paramount to keep the unique and the original. In a serendipitous twist, not long before I stepped into the apartment for the first time, I had met the artist and musician who had been tasked with managing the first incarnation of the space.

Ross Rheaume had tales to tell and priceless knowledge of the initial construction. We learned that the teak floors and columns had been laid on a sub-cork floor for sound insulation and hand-hewn on the spot. He had kept the before pictures of an apartment cut up into small and cavernous rooms. The gift of this apartment was how cleverly they had used the columns and beams to disguise air vents and stacks. The columns were visual testaments to the affinity and affection the owner had held for Hindu temples. In her tumultuous alt-rock angst world, she had fashioned a haven of peace that the Dalai Lama himself had graced with his presence. When blue and silver were chosen as primary colour and metal, the concept name was as evident as the feeling that would overcome anyone who walked through the front door: “Cloud Nine” started to take shape.

However, as much work as Ross had put into shaping the rooms, there were many corners cut. These tiny transgressions stood out like sore thumbs to my eye. To illustrate the most offensive one: The filler chosen to separate the limestone tiles and teak floors was a Styrofoam strip. To amend and align with the overall organic materials, out went the plastic and in came a centuries-old trick to accommodate the shifting of wood in variable temperatures: hemp cord. Furthermore, the owner’s intricate 1990s sound system had left holes in walls and floors. Much of the work was to polish up and finish off Ross’ splendid work. He, himself, came to undo a prayer platform where the breakfast nook now sits. We used the extra wood to patch where needed.

The kitchen was completely redone to accommodate my friend, who is as known for her delicious cooking as for her warm hospitality. The marble countertop looks like a foggy river stream and finds a perfect counterpart in the glass mosaic backsplash tile. The nobility of the custom quarter-sawn oak cabinets speaks to the high-end finishes demanded throughout. Hammered silver pulls and levers bring the Arts and Crafts philosophy full circle: There is no detail too small that need be forgotten nor left behind.

This home was designed to assuage, comfort and calm, and with the proper adjustments, it became an intensely private and personal space where the owner could collect her thoughts, put them to paper and find her wings.

Cloud Nine beckoned to be a lushly feathered nest, and the soft furnishings were chosen accordingly. Chairs were clad in velvets and sheepskin, plush handwoven Tibetan carpets begged for bare toes to sink in. The themes of sky and water run throughout the space as they do above and below outside: The ceilings were painted a pale blue to pull in the skyline and raise the verticality of the rooms; translucent curtains were hung to soften and hold the light, as well as to hide the window edges thus erasing the physical barriers between inside and out. Splatters, rivulets and watery streaks repeatedly interplay from curtains to backboard, counters to chairs.

A touch of modernity was added with new lighting: Lambert & Fils pendants in the kitchen sync with Gervasoni’s brass floating drum above the dining room table and Tom Dixon’s sconces flanking the breakfast nook. The oversized lotus flush-mount in the entry announces the meditative quality that permeates the very air of this home.

Spaces were created to invite creativity. The end of the island was fashioned into a perch with a view where my friend could sit comfortably and write. The media console became a branch above the fray when we added a long, tufted cushion.

My favourite touches are all hers: For my friend has travelled the world and brought back meaningful mementoes that speak to her tender and enlightened soul. From pewter silverware to Flemish clay ceramic vases, the objects that stood out to me the most came from afar as much as from close. We took her antique Kimono Obi found in Japan and made five beautiful cushions that will be as timeless as they are personally priceless. Pebbles were collected from sea to sea, but again, the ones I love are the ones she found on one of her walks on the wild eastern shores of our country: One is marked with an “x,” and the other has a natural “o.”

It takes someone intrinsically connected to the world’s earthly treasures and tempo to notice a special pebble amongst a multitude of pebbles. This is her gift. The very same gift that found me, lifted me, and thus, by giving me meaning, gave me back life.

“All is best, though we oft doubt.
What th’ unsearchable dispose.
Of highest wisdom brings about,
And ever best found in the close.”
— from Samson Agonistes by John Milton.

Henrietta Southam is a decorator and designer who was born into an art and performance-passionate environment. Educated in Europe, Canada and the U.S., her work has been extensively featured in numerous publications. A champion of Canadian design and art, Henrietta strives to use her work to shine a spotlight on her birth country’s excellence.