In Caravaggio’s iconic painting, The Calling of Saint Matthew, 1599-1600, the apostle is depicted as a man with a thin face, prominent nose, shaggy beard and startled expression. In the painting, Christ is dramatically pointing at Matthew inviting him to become a follower. The surprised looking Matthew seems to ask: “Who, me?”

Ottawa author Mark Frutkin studied that painting endlessly as he researched his forthcoming novel, The Artist and the Assassin, about the Italian painter Caravaggio. 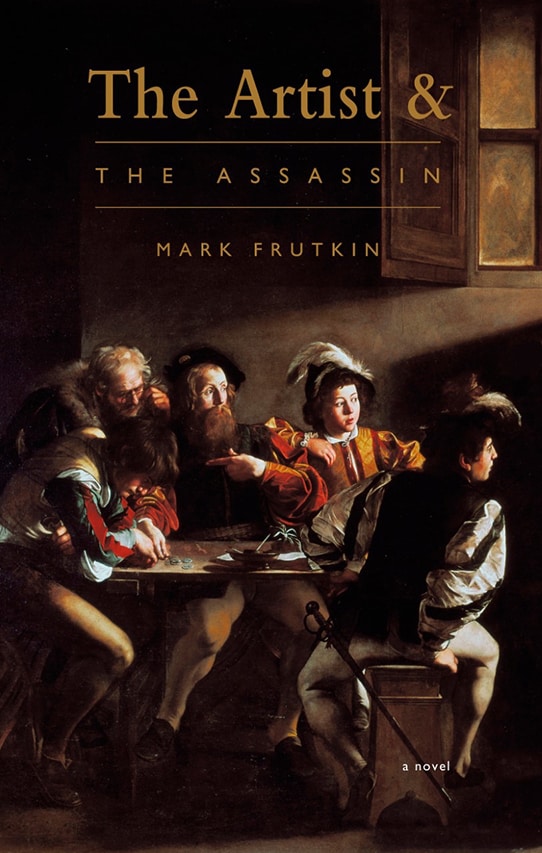 “The painting just really stood out for me as one I could work with,” Frutkin said in an interview. Indeed, the painting is key to the book’s plot and is shown, in part, on the cover.

Frutkin realized the painting would offer him a pathway into the story he wanted to tell about a dark, symbiotic relationship between the very real Caravaggio and a fictional assassin, Luca Passarelli, who first served as the model for Saint Matthew and was later hired to kill the artist. The evolving relationship between the men is an otherworldly mystery. The two are both reckless brawlers. But only one can paint and impress the Pope.

Caravaggio was infamous for hiring low-lifes to pose as saints for paintings commissioned by church officials. He even used the corpse of a prostitute to be the model for Saint Mary in the painting Death of the Virgin, 1606. (A scandal followed.)  So, it is quite probable the model for Saint Matthew actually was an unsavoury character.

The Artist and the Assassin is tentatively scheduled to be published by Porcupine’s Quill in July. It’s not Frutkin’s first historical Italian novel among his previous 16 books, ranging from poetry to novels to non-fiction. His most celebrated is the novel Fabrizio’s Return, a story about an enchanted violin in 17th and 18th century Italy. That book won the 2006 Trillium Award, for being the best novel published that year in Ontario. In 2014, the book was turned into an opera called Fabrizio’s Comet, which toured the United States. A 1988 novel, Atmospheres Apollinaire, was nominated for a Governor General’s Literary Award.

Michelangelo Merisi da Caravaggio was born in 1571 and died, not yet 40, in 1610. Some of the details of his life are known. But many remain a mystery.

“That is absolutely an invitation to use my imagination,” says Frutkin. He tried to keep to the record as much as possible but there was still considerable leeway to embroider. The assassin is invented and so are anecdotes surrounding the backstories of some of Caravaggio’s iconic paintings.

Consider The Musicians, a painting Caravaggio created for his Roman patron, Francesco Cardinal Maria del Monte. The homoerotic scene shows three musicians preparing to perform. Caravaggio himself posed as the horn player. The young men are carelessly dressed, showing a surprising amount of skin. They stare, with a come-hither look. A fourth figure is another young man, Cupid, the god of love. Frutkin imagines the cardinal’s reaction upon seeing the completed painting.

“It is marvelous,” the cardinal exclaims. “Of course, I cannot allow it to be seen by my more conservative colleagues. But I will surely be displaying it for other friends, those who can appreciate what the finest painting can accomplish.”

The book is written from two viewpoints, that of Caravaggio and of Luca, the assassin, in alternating chapters. Luca is hired to kill Caravaggio by the relatives of a man the artist killed in a street brawl.

Charged with murder, Caravaggio is forced to flee Rome on a journey that takes him to Naples, Malta and Sicily. Luca follows Caravaggio around the Mediterranean but fails to kill the artist. When the Pope offers Caravaggio a pardon, the artist heads back to Rome, followed by the assassin.

In reality, Caravaggio died from some disease or infection journeying to Rome. It would be unfair to tell you how Frutkin treats the death except to say that the ending just might make you rethink the relationship between the artist and the assassin.

During his many trips to Italy over the years, Frutkin saw some Caravaggio paintings but he really fell for the artist’s work in 2011 when there was a Caravaggio exhibition at the National Gallery of Canada.

“That sparked my first thinking about it for sure,” he says of the exhibition. He let the idea percolate for a few years and then spent more than five years researching and writing the novel.

Frutkin says he is attracted to Caravaggio for the intense brightness and darkness in his paintings and in his mercurial personality.

“The thing that most intrigued me was his discovery and use of the ‘chiaroscuro’ technique in painting, which brings together the darkest blacks and the most brilliant hues in contrast, like a beam of sunlight entering deep into a dark forest to light up a patch of leaves. Chiaroscuro was actually the structure of his personality and life. He himself embodied the blackest with the brightest. His anger and savagery on one side and his incredible creative vision and activity on the other.”

The Calling of St. Matthew was not part of the National Gallery exhibition. Frutkin has only seen photographic images of the painting, never the painting itself. But he certainly wants to see it now after obsessing over it for years while writing the novel.

“It’s another reason to go back to Rome.”