For a select number of nature-loving families, heaven on earth is 50 minutes from Ottawa.

It’s called Clos de Sixte. Situated between Ottawa and Mont-Tremblant, in the verdant municipality of Mulgrave-et-Derry, it’s touted as a 450-acre, four-season, gated cottage community. The truth, though, is something bigger and better.

Towering old-growth forest, moss-covered, glacier-carved rock and a dizzying array of greenery immediately draw the eye. Equally astonishing, though, is what you don’t see. Scanning the landscape from a cottage balcony overlooking Lac Saint-Sixte, there are no speedboats in sight. Nor is there a string of cottages, one after the other, visible in all the sight lines. Instead, you’re apt to notice neighbours sculling, kayaking, swimming the length of the lake or jumping off the cliff at McElligott’s Point. You’ll also see cottagers passing by aboard luxury pontoon or low-powered boats, laughter echoing as they enjoy the sunshine or the sunset, surrounded by untamed nature in all its grandeur.

That’s the way Bob and his wife Micheline have planned it. They own Brickland Timberlay Corporation, the company behind this pristine enclave. Bob has decades of experience as a successful builder and developer and Micheline was portfolio manager within the property division of Global Affairs Canada, so both have a wealth of expertise in putting places on the map.

This one? Bob chuckles when he says, “It’s the big secret.” It’s also the next frontier in luxury cottaging. The couple, who have grown children and a home in Rockcliffe Park, envisioned a private, environmentally-friendly, family-focused natural setting that would offer the best in outdoor living and sustainably conscious development. So Bob started looking. “I was asking if any lakes might be for sale.”

Eventually, this lush spot was unearthed and its provenance identified. As Bob tells the story, over a century ago King Edward VII deeded the land to the Bronsons and the Robertsons, two of Ottawa’s founding families. For more than 100 years it served as their private destination for fishing, and until Clos de Sixte was established the only settlement was an age-old fishing club.

Today that heritage is honoured. There’s a master plan for Clos de Sixte, and despite the vast acreage only so many lots are available. They include lake, mountain and pond-sanctuary sites. Most are on the water, and all are over an acre in size. The average building lot is three acres. Whichever lot you choose, though, access, privacy and sight lines are optimized, thanks to careful, eco-conscious planning.

That’s the true luxury of this legacy project. There’s a reverence for nature and a concerted effort to preserve its richness. “We’re really putting the beauty of the forest first,” Micheline points out. “In the wintertime,” she adds, “it’s absolutely beautiful.” Not only is Clos de Sixte picturesque and peaceful, it is most definitely exclusive. “My goal is to have 40 families here,” Bob says. “We’re half way there.” Once the decision is made and new owners experience this cottage lifestyle, “They say, ‘Thanks so much for the vision.’ They are so happy.” He smiles. “People consider this a place they’ll have for generations to come.”

On a summer day, Bob and Micheline are sitting on the deck outside their dreamy Nantucket-style cottage. The view is amazing, and Bob is thirsty. He grabs another drink inside; he’s just played tennis for two and a half hours.

This heaven has a tennis court. “It’s the nicest court around,” Bob grins. “It’s clay.” The tennis centre, with its timber-frame pavilion for post-match gatherings and barbecues, is just one of the on-site amenities enjoyed by a very active, social community. There are more to come, too, with plans in the works for everything from pickleball to arts and crafts facilities. Bob’s dream is to have a “concierge couple” living here through the year to manage the community. Already, though, Clos de Sixte has taken on a life of its own. One of its traditions is the annual New Year’s Day pond hockey game, Shirts Versus Skins, on the surface of the lake. Another is the blazing of trails. “We have 20 kilometres of trails, and trail blazing parties,” Micheline says, describing the action. “We create trails as a community.” 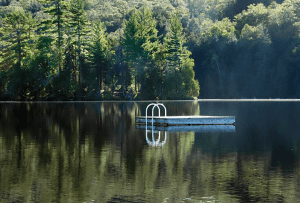 As she talks, there’s a faint sound of laughter. It’s the grandchildren playing somewhere in the leafy distance. Bob’s son Paul and his family have an adjacent cottage lot. In fact Paul, president of Casa Verde Construction, is Clos de Sixte’s resident builder. He is an expert in timber-frame construction and LEED-certified sustainable development, and to date he has built many of the luxury cottages.

Paul, a big, affable guy, takes a minute to introduce his own place, which is still under construction since he’s so busy with other work. The level of craftsmanship is evident nonetheless, and the gorgeous glass-and-timber design utilizes wood right from the property. To conserve green initiatives, he says, “What we take down [from the forest], we integrate.” From the barn doors and beams incorporated into the various homes to the log slices set here and there along pathways, landscape and lifestyle blend naturally. Though owners are free to choose whatever contractor they want to build their cottages, most have chosen Paul. Images of the striking, light-filled homes attest to the quality and ingenuity of his work.

Clearly, the younger McElligott appreciates Clos de Sixte as much as his elders. As Paul heads off to play tennis and Matt Lawrence pulls up to the dock in his pontoon boat, it’s also evident the appreciation is shared. Matt and his family have had a place at Clos de Sixte for a number of years, and there’s no doubt he loves spending time here. His family’s “cottage” is a reclaimed timber-frame barn that has been transformed into an open concept, 3,500-square-foot chalet. “I bought the barn frame in Fallowfield,” he notes. “It was built in the 1850s.” He approached Paul to transform the historic barn into a modern retreat. “I trusted him.” The result is a striking, 3.5-floor LEED Silver-certified home with numerous unique features and amenities.

As Matt steers the boat around the lake, with Bob and Micheline along for the ride, he points out some of his other favourite haunts. There are many, including the island where his kids pick blueberries and the perfect spot to go swimming. “It’s a very clean, deep lake,” he says. “There are not many weeds at all.” He identifies a loon’s nest, a lakeside stone outcrop that looks like the Roman general in the Ottawa Senators logo, and the area where the annual shinny game happens. “We’re here in the winter all the time,” he says, sharing a sentiment expressed by Micheline: “It’s beautiful.”

Occasionally, as the boat follows the shoreline, there’s a pause to chat with the families enjoying another idyllic day on the water. Jokes are shared and plans are made. There are smiles all around in this happy place, as rituals, stories and cottage memories are forged for the generations to come.