Going with the Flow

When Christopher Simmonds was a boy his family lived in England, with its celebrated gardens and pastoral settings. One time, he recalls, a tree died in the front yard and his parents weren’t sure what to do with that rather forlorn corner of the property. “Let’s build a rock garden,” young Christopher suggested. He was five. 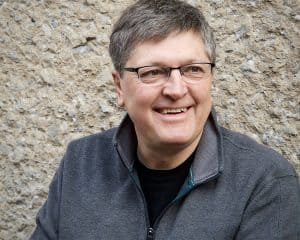 Decades later, the award-winning Ottawa architect is every bit as attentive to the surroundings, though the English gardens of his childhood have been replaced by this country’s rugged vistas. Today, Simmonds is a master of harmonious modern space, thoughtfully integrating structures into the environment and ever-mindful of the sanctity of nature. What’s really intriguing though is his headspace.

On Wednesdays for instance, he teaches a lunch-hour meditation class at Planet Botanix on Bank Street, leading participants through yoga stretches, breathing exercises, chanting and guided meditation. He does evening classes too, and offers advanced personal instruction in yogic meditation techniques.

Simmonds has been practicing yoga and meditation since his university days, and for years he has been a certified teacher. This spiritual path, with its focus on inner peace and interconnectedness, has perhaps not so coincidentally led to much professional success.
In October, there were six trips to the podium at the annual Housing Design Awards hosted by the Greater Ottawa Homebuilders’ Association. The name Christopher Simmonds Architect was announced for awards in categories ranging from exterior living space to renovation $500,001 and over. Along with RND Construction Ltd., his firm also collected the Innovation Award for Green Custom Home of the Year.

2017 accolades were also garnered at the Ottawa Urban Design Awards for a multi-unit project, Pinhey Quartet, as well as from the Ontario and Canadian Homebuilders’ associations for a luxurious, modern retreat called Revelstoke. Named Most Outstanding Custom Home in the 3,000 to 5,000 square-foot category, the Revelstoke has the look of a Christopher Simmonds project; visually arresting, it artfully melds interior living quarters with the landscape.

This architect is not solely concerned with appearances, though. “Many people design based on what it looks like. I design based on what it feels like to be in the space. I always try to design things so that when you’re sitting in the house, you are calm and at rest, and you are surrounded by nature. You’re enveloped by positive energy.”

He also applies principles of feng shui, the ancient Chinese system of arranging space so that energy is balanced and the surroundings are in harmony. “It’s all about the movement and flow of energy,” he explains. “The way you move through a house, you’re moving with a sense of calm and flow.”

As an approach to architecture, Simmonds’ way is one he started to explore early on. “I was interested in Eastern philosophy as a youth,” he mentions one afternoon as he sits at the end of a table in the firm’s workspace at 45 Eccles Street. Tucked away from the bustle of the street, the setting brings to mind a modern, expansive tree house.

There’s none of the tension, glare and hum associated with traditional offices, with their long harshly lit hallways, dark doors, and cookie-cutter enclosed spaces. The man who’s talking, the one with the salt and pepper hair and casual clothes, is as open and relaxed as the surroundings.

“I’m a bit of a low-key guy,” he admits as he settles in to discuss his work and the life that has inspired it. At age 13, he read his first book on yoga and meditation. “I found it fascinating, and I said to my parents I was going to do yoga every day for the rest of my life.” He grins ruefully, admitting the plan was short lived (as mom and dad anticipated). As he matured, however, the same path continued to beckon.

In high school he read Be Here Now, a groundbreaking book by spiritual teacher Ram Dass about yoga, meditation and spirituality. Then in 1973, just as he was turning 18, he headed off to the University of Waterloo. That September he started going to yoga classes. “Within three months I had taken up the practice of meditation. I was practicing meditation every day.”
After finishing his pre-professional degree at Waterloo, he headed to Ottawa and Carleton University to complete his professional degree in architecture. Why architecture? “I was intrigued by the different things you got to study, such as design, engineering, art history, psychology. There was a breadth of opportunities.”

The last year of school at Carleton was the most fun, he continues, thanks to the theme of the studio course: building in the landscape. “I’ve always had this affinity for landscape.”
In fact, he spent a year working with a friend who had a landscaping company before moving on to the nine-to-five realm, where he honed other skills while employed for 14 years as a senior associate architect at Otto + Bryden Architects Inc.

Once he opened his own firm, Christopher Simmonds Architect, in 1996, he made a discovery: “I realized I could do things that I liked to do.” That’s when he started collaborating on projects with his landscape architect friend, Juergen Partridge. He also began poring over books about feng shui.

Guided by his own values and vision

While much of the content struck him as superstitious, he says the essence resonated rather deeply. To broaden his understanding, he went off to the Omega Institute for Holistic Studies in New York’s Hudson Valley, a serene enclave devoted to fostering a more harmonious, interconnected world.

From there he recognized the importance of creating balance. What’s more, “I discovered if I used my intuition, I had a natural understanding of how feng shui works, how it feels.”
His passion for landscaping also came into play as he grew his architecture practice. Describing himself as “garden obsessed” at the time, Simmonds says, “I would read gardening books every night.” What took shape organically from all this is a philosophy that continues to steer the work of the firm: holistic, inclusive, sustainable design. 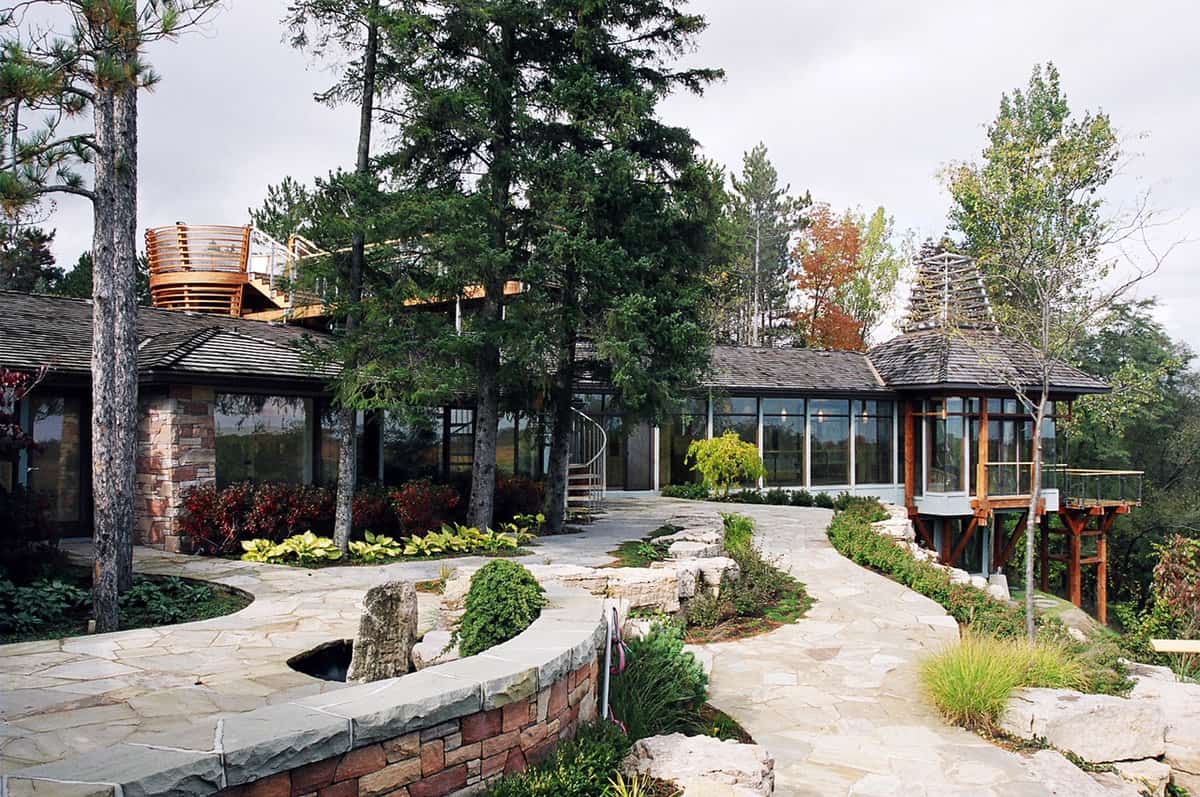 Along the way, he became something of a trailblazer. In 2008 he earned a leadership award from the national capital chapter of the Canada Green Building Council, when his firm’s design for the Rideau Valley Conservation Authority (RVCA) headquarters set a new green standard. It was the first building in eastern Ontario to achieve LEED (Leadership in Energy and Environmental Design) Gold certification. Since then many other LEED-certified projects have followed, including the Zen Barn, Atlantis, and the Eco River Lodge. The Eddy condominiums received LEED Platinum certification, and the new Tomlinson headquarters building is targeting LEED Gold.

The RVCA project posed an interesting challenge; although the conservation authority’s mission is to manage and protect the watershed, the site wasn’t directly on the waterfront. “Let’s bring the water to them,” Simmonds decided. “The idea came to me while I was on holiday,” he recalls. “I was sitting under a tree by the water, meditating.”

On many levels, his concept was an inspired fit. The positioning of the structure on the property, the configuration of the building, and the arrangement of interior space served to minimize the need for potable water and maximize energy savings. What’s more, he designed the site so that a mini-watershed surrounds the building. Water flows off the roof to form a stream that gently flows around the building, and at the entry there’s a pond that’s crossed via a pedestrian bridge.

Since the project’s completion, there have been tours to show others how it was done. Not only does it uniquely reflect the nature of the organization it serves, it blends naturally into the scenery.

That relationship with the landscape is a hallmark of many of the firm’s projects. The Eco River Lodge, an annex to the Wakefield Inn, is nestled into the slope of a hill creating a luxurious oasis of calm and giving each room a view to the adjacent river and forest. The new Tomlinson headquarters seems to hover over a sculpted landscape, evoking the feeling of a restored quarry site. To arrive and enter the building is to experience the strength of stone and earth.

Invariably, Christopher Simmonds has a way of creating spaces that feel right. “If the story or feng shui is there, the building or house grows naturally around it,” he says.

These days, however, the boss doesn’t deal with the details of projects. “I have a very talented staff,” says the father of three and grandfather of one. He talks with pride about the different professionals on the team, showing iPad images of some of their work. “We have a very collaborative practice.”

He also talks with pleasure about his family, sharing pictures of his children, wife and granddaughter. Two of his kids are grown, while the youngest is at home. As dads do, he shakes his head quizzically, eyes twinkling, when mentioning his teen daughter accompanied him to the design awards in the fall. Then his face lights up again, the way enthusiasts’ do, when he speaks of an aspect of his work that he really loves: “Clients come to us with some idea of their needs and aspirations. Creating something for them that is a pleasure to live or work in, and that exceeds their expectations, is a great satisfaction.” 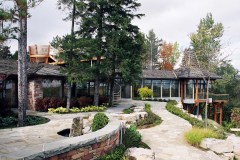 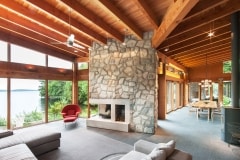 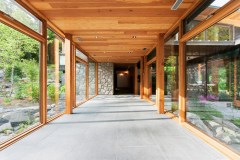 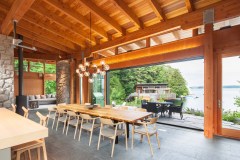 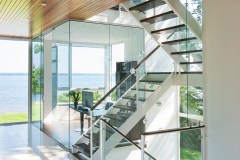 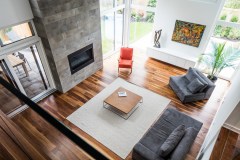 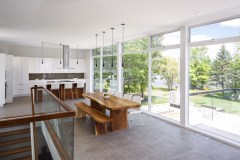 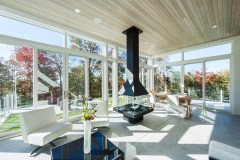 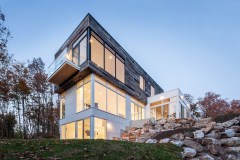 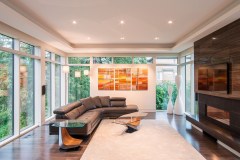 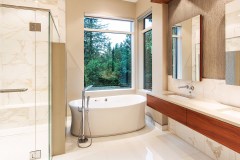 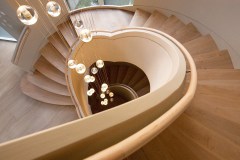 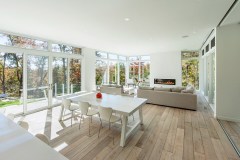 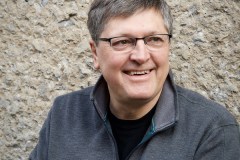