For the love of DESIGN

Creative couple completes work on eighth home, a luxurious bungalow in the woods

Paul and Jane Blinn can’t stop. In the past 16 years, the couple has either remodelled or built eight homes, hauling their two children and Jane’s mother with them every time they make a move. But while some might find living in a perpetual construction zone a chore, for the Blinns, it’s just what they do. “It’s our hobby; it’s our love, really. We enjoy doing it,” Jane says simply.

All that experimenting with new designs, materials and colour has got them to the point where they really know what they like and don’t — and that means house No. 8 is pretty much bang on, or at least it will be when they finish puttering away at the parts of the home they kept for themselves to complete.

Paul, vice-president of construction for Cardel Homes, has an eclectic background that includes a decade in high-tech and several years running his own renovation firm. He needs the distraction and activity that their to-do list provides, especially in the summer, when Jane can work 15-hour days managing the Calabogie Motorsports Park.

To be fair, their home doesn’t look like a construction zone; in fact, it’s quite stunning and won three trophies at the 2016 Ottawa Housing Design Awards. But when they point out closets that don’t yet have built-ins, the mudroom that’s just a shell or the blank wall in the great room that will become a feature, it’s easy to see the “finishing, finicky stuff,” as Jane puts it, still to be done.

“I just kind of fill in the blanks here and there a little bit,” Paul says.

For them, living in the home for awhile before getting to that finicky stuff helps them develop a better understanding of what they want in a space.

“Don’t be in a hurry, take the time, get it right,” is Paul’s philosophy.

Even designing and building the home took time.

They bought the two-acre estate lot in rural Stittsville a decade ago and then waited. First, they waited to see what other types of homes would be built in the subdivision, not wanting theirs to be either the smallest or the largest. In the meantime, they kept building and renovating other homes.

Then, coming up with the design took several years as Paul first searched for the perfect floor plan and, when he couldn’t find it, drew inspiration from the one that came the closest. It was, ironically, a Cardel model that provided the spark, although not one you’d find around here.

Cardel, a family-owned company started in 1973 and based in Calgary, builds estate-sized homes in Florida. One of them, where the bedrooms are pushed to the corners of the home for greater privacy and the main living areas grouped in the middle, caught their eye. With the help of Cardel’s former design manager, Jenny Black (she now oversees production), and drafting technician, Elyse McCurdy, they modified the plans to suit their family.

The result is an immensely livable, 4,000-square-foot bungalow nestled among the trees that has the feel of a comfortable, if luxurious, retreat. All that’s missing is the lake, which Paul admits he’d really like to have.

And although large, the four-bedroom home, with a (still to be finished) walkout basement that includes a private in-law suite for Jane’s mother, manages to feel cosy, thanks in part to an insistence on earthtones and natural materials. It’s a look they’ve always been drawn to and a traditional style that works for them.

“They like to combine texture and colour to create that more casual feel, but with all of the luxurious elements, you would get in a high-end home,” says Black, who has worked with the Blinns on a few of their homes. “On paper, this is a huge, mammoth house, but it does not feel that way because the warmth almost draws the walls in, and not in a negative way. It’s an inviting, cosy space for that amount of square footage.”

Adds Jane: “Doing it that many times, we really learned what we like and what we don’t. I don’t think anybody building a custom home gets it perfect on the first go-around.”

But will it be their forever home, finally? Don’t count on it. While it’s the biggest one they’ve built and they plan to stay until their children leave home, “we’re going to go down (in size) from here,” says Jane. 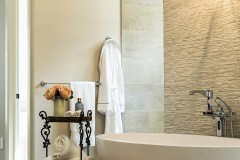 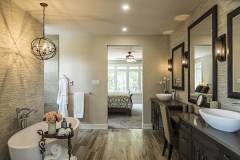 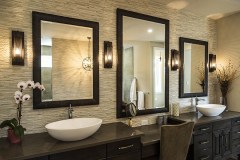 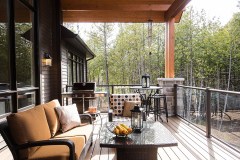 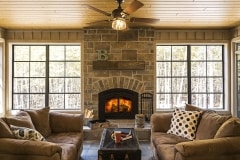 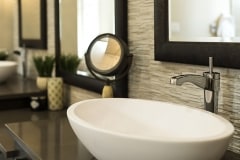 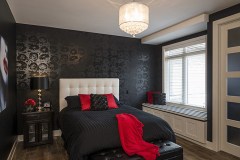